Firstly let me apologise if this post descends into indecipherable drivel. But that’s my writing style, and it’s got me where I am today. Aside from that, I just read a disturbing article informing me that my late-night lifestyle is making me sick and stupid; my ability to form coherent sentences is diminishing, and my days of comprehending simple arithmetic may be numbered. I don’t even understand that last bit!

I spend most of my nights in jazz clubs, and have done so since I was in my late teens. Back in Australia, this wasn’t so bad, as the action would generally wind up by midnight or 1AM (we all had to be up early to feed the wombats). Then I came to New York. On my first trip here in 1996, Smalls Jazz Club was open until 8AM, and often later. I’d get my arse handed to me at the jam session, go to a diner to berate myself over breakfast, and be in bed by noon. These days, I’m older and wiser, and am tucked up by 6AM.

Inaccurate band T-shirt from my youth

Conventional wisdom says that we eventually adapt to a change in sleep patterns; that if we keep our hours regular, and turn in at the same time every day, the sleep will be just as beneficial. I even dimly recall reading articles that claimed our most creative work is done after midnight. But recent studies refute all this, and moreover, suggest that staying up all night and sleeping all day, while undeniably awesome, has some pretty serious downsides, namely type-two diabetes, heart disease, cancer, and a “significantly shorter lifespan”. Additionally, these studies show that, “the brains of workers who’d done 10 years of night shifts had aged by an extra 6 1/2 years- they couldn’t remember as much or think so quickly.” And at 4AM, apparently my ability to think is the same as if I was drunk. Of course, I wouldn’t know what that’s like, but it sounds serious and fun.

Anyway, I thought I’d prove all these so-called experts wrong by doing a bit of investigative googling and coming up with some brainy achievers who share my habits. Unfortunately, many people known as “night owls” (Freud, Churchill, Tolstoy, Mozart, Nabokov, Obama, etc) are nodding off at a relatively respectable 1AM. For real day-sleepers, here’s what I came up with: pianist and hypochondriac fusspot Glenn Gould; gloomy ponderers Franz Kafka and Marcel Proust; literary lunatic Hunter S Thompson (check out his insane daily routine), and maniacal dingbats Josef Stalin and Adolf Hitler. The only glimmer of hope is Rolling Stones madman Keith Richards, and it’s looking more and more like he’s not actually human. I’m not in healthy, well-adjusted company. 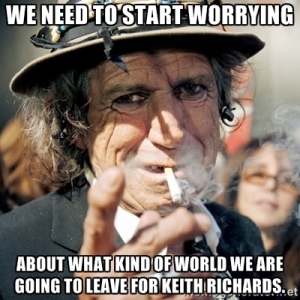 The most frustrating part of these reports is that they offer no solution other than doing what every minuscule fibre of my body is desperately pleading with me to do. I want to hear that I can reverse the negative effects of my boogie-loving lifestyle by, I don’t know, eating carrots? Finishing the occasional cryptic crossword? Curbing my consumption of the blood of comely young virgins? But no. It seems I’ll have to resign myself to incremental idiocy and an early demise.

Are you an all-nighter? Someone you know? Want to cheer me up with tales of healthy, alert, intelligent, productive, long-living nocturnalists? Use the comments box below, but not too many big words please. Anyway, got to go- it’s nearly midnight and lunch isn’t going to make itself.

4 thoughts on “Afternoon Has Broken, Also Brain: The Price of the Jazz Life”