The following was written in Hong Kong, but posted in Sydney. I’m really not very good at this. Enjoy!

If you’ve been enduring my incessant social mediafying, you’ll know we’re about half way through our Hong Kong escapade, and I thought a rundown was in order. I’m here with a gang of killer musicians from New York to play with Hong Kong pop star Bianca Wu. We’ve all worked with her many times over the past six-or-so years, and this is our third visit to the area. Bianca’s a pretty big deal in these parts, and we’re here doing three shows at the 1200-seat Lyric Theatre in Hong Kong’s Academy for the Performing Arts. The shows are big- 26 songs over two and a half hours; it’s a real workout for the rhythm section, and an absolute doddle for me. The horn section is only on stage for about two thirds of the show, and much of that is spent adjusting our music stands and losing count of bars of rest. The rest of the time I’m offstage, wandering the labyrinthine hallways shouting “ROCK ’N’ ROLL!!” in a bad cockney accent. Never gets tired. There’s altogether too much rehearsing and sound checking, but we’ve had a bit of time to get into some trouble. 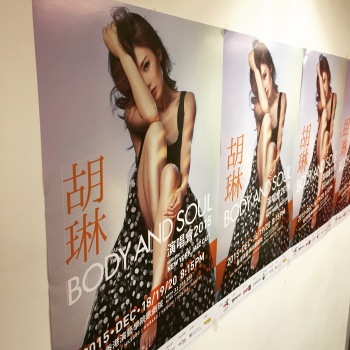 To start at the start, we were met at the airport by our producer Patrick, and bundled into cabs to the city. It’s a fair hike- the airport is located on the always-satisfyingly named island of Chek Lap Kok (yep, still there), and the trip takes you through several islands, Kowloon, and under Victoria Harbour- none of which is visible from the endless freeway. We were all pretty dazed after the marathon flight, but steeled ourselves for a welcome dinner at a local restaurant. My spirits lifted noticeably with the discovery that the joint’s specialty was roast meat. Suddenly, it became clear that the only things missing from my life were dead animals and weak Chinese beer. I mentioned this to our host and was presented with a whole fatty, crispy, juicy, life-affirming roasted goose, which I ate. I would have ordered another one, but fellow diners were starting to look at me with genuine concern. I wiped enough goose fat out of my eye to wink reassuringly at them, then lay down under the table. Eventually I slid back to the hotel where I took a handful of Melatonin and slept like a greasy baby. 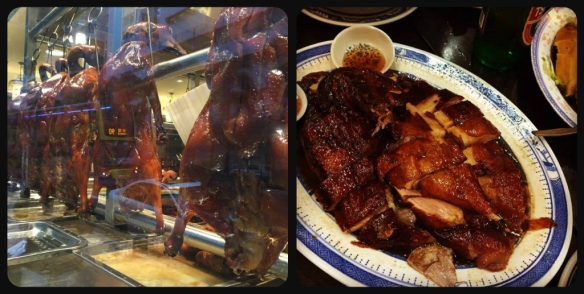 Next morning, I jolted my addled brain into action with a visit to one of the excellent coffee shops which are multiplying throughout the city. Traditionally, China has been associated with coffee in the way the US has been associated with thin healthy people, but this is changing fast, and I had numerous quality caffeinated options in walking distance from our digs. Alert and teeth-grindingly jittery, I joined the band for a hair-raising van ride through the city to our first rehearsal. For an hour we were thrown about like sneakers in the clothes dryer, while our lunatic driver veered across lanes and ploughed through vegetable carts and stacks of empty boxes; all the while juggling a dozen cell phones emitting incessant, piercing alerts and ringtones. When we arrived at rehearsal, it was all I could manage to crawl to a couch, close my eyes, and do nothing for two hours. Fortunately, that’s what I’m being paid to do.

The Afterthought Horns and the rhythm section. Both doing what they do best.

Honkers is a glutton’s paradise, with noodles, dumplings and delicious animal parts of every imaginable species within arm’s reach. I had a bit of time on Thursday, so I went searching for a couple of joints that had come recommended. I wandered down to the stunning Victoria Harbour, surely one of the loveliest city harbours in the world, and hopped on the ferry to Kowloon. It’s madness over there- an engorged, throbbing, quivering mess of humanity. Tourists, locals, hawkers, beggars, millionaires, all conspiring to stop me getting anywhere. I had some pretty amazing dumplings at the famed Din Tai Fung, then fought my way back through the throng. By the time I got back to the harbour, I’d somehow managed to buy a dozen watches, four suits, and a Filipino wife. Don’t know how I’m going to fit them all in my bag. 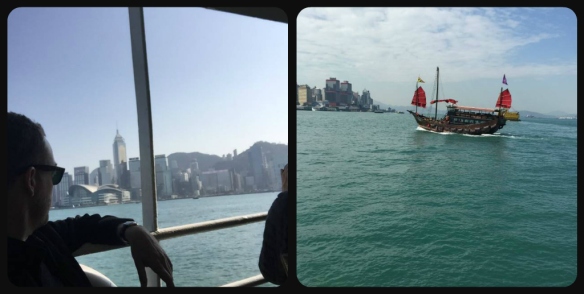 Then it was another ferry over to the part of town creatively titled Central, where I was aiming for a little noodle place endorsed by Anthony Bourdain. I slogged up and down tiny alleys till I found the spot Google had assured me was the one. Three mouthfuls of impenetrable, leathery noodles were all I could get down before I pushed my plate away in defeat, grudgingly paid the bill and plodded home, cursing Bourdain, that lanky, septic bugger. It was then I discovered that I’d been at Mak An Kee, ONE BLOCK from my noodley holy grail, Mak UN Kee. I’ve just checked my Cantonese-English dictionary, and it seems “Un” means yummy, and “An” means rubbery tasteless shit reserved for idiot westerners.

That night we had our first crack at the stage of the Lyric, about which I will tell you… next time. Cheers!